As the holidays approach, few gifts send the message of love like fine jewelry.  Van Cleef and Arpels in New York City not only produces an amazing collection of jewelry but watches and fragrances as well.  Van Cleef and Arpels in New York City is world-renowned for their ability to create jewelry designs that spark imagination and wonder.  Among their High Jewelry collection, Van Cleef and Arpels have assembled eight collections of jewelry which are sure to capture your eye and your heart.  Among the eight series, there is the Palais de la chance, Les Voyages Extraordinaires, California Reverie, Bals de Legende, and Les Jardins.

The California reverie is an exploration of the beautiful scenery found along the California West Coast.  Designs of the landscape, animals and vegetation are all explored.

For the Bals de Legende collection, the designers at Van Cleef and Arpels in New York City decided to explore the great balls of the 20th century.  The time was an era of sumptuous living, extravagant themes and magnificent costumes.  Of the many great balls of that time, Van Cleef and Arpels has selected five noteworthy follies: the Great ball in Imperial St. Petersburg, the Oriental Ball in Paris, the Ball of the Century in Venice, the Proust Ball in Paris and the Black and White Ball in New York.  Each of the pieces of this collection will inspire you.

Les Voyages Extraordinaires is a collection of work inspired by the science fiction author Jules Verne.  The pieces of this body are magical and imaginative and illustrate four journeys to extraordinary locations.

One of their truly inspirational collections, the Les Jardins collection, draws upon the craftsmanship of ornamental gardening to pay homage to the natural world.  The pieces of this High Jewelry collection are idealized images of nature using four different styles of gardening to help guide the artist’s hands.

The Asian garden tries to recreate the natural garden in microcosm.  The French garden uses strict geometry as a way to illustrate reason over nature.  The Italian Renaissance garden attempts to extend the house out into the nature, while the English garden creates an open, sweeping landscape.

The Les Jardins collection includes a number of incredible pieces that have been inspired by Poliphilo’s Strife of Love in a Dream which influenced 16th and 17th century Italian philosophy and the world of art.  Van Cleef and Arpels in New York City has taken the romantic views of this work and created pieces of jewelry that are breathtaking. 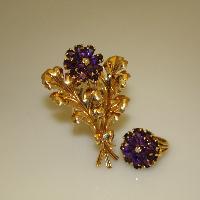